Work on open access (OA) has been going on for around twenty years in Finland. In other words, at least as long as anywhere else in the world. Those actively involved in this work have been developing new open access policies and affecting change in existing ones also on the international stage. Among the first to engage in open access issues in the Finnish context were Bo-Christer Björk, now Professor Emeritus at Hanken School of Economics, and Kristiina Hormia-Poutanen, Director of Services, Library Network Services, at the National Library of Finland.

The Finnish Open Access Working Group was established in the spring of 2003. It was at that this time, as Björk and Hormia-Poutanen recall, that conversations in open access circles concerned pressing questions such as what open access means, how and why it should be promoted, and how the whole scientific publishing community could be involved.

In fact, the minutes of the Group’s first meeting on 24 April 2003 could well have been written in 2022. While Hormia-Poutanen had convened the meeting, Professor Björk of Hanken’s Information Systems Department was elected Group Chair. ”Just as is the case now, involving researchers was the main channel for promoting open access at that time. The most important thing for researchers is their own research, the advancement of their own research, and how open access publishing can contribute to their careers. These are always topical issues it would seem,” says Hormia-Poutanen. This view is shared by Björk: ”In the end, the most important thing for a researcher is not whether a publication channel is open or not, but rather getting published in the highest possible quality channel. But if openness increases visibility and readership, then this is an important argument for open access.”

Björk says that as soon as the Internet appeared in 1994, he realised its potential for scientific publishing: ”In the late 1990s, we were living in a world of printed scientific publishing, and I was optimistic that scientific publishing would immediately start to take advantage of the internet and the openness it offered. Unfortunately, we had to wait until the first half of the 2000s for e-publishing to become widespread.”

Björk himself did not wait. Back in 1995, he and his colleagues founded a scientific journal, which until 2006 was called the Electronic Journal of Information Technology in Construction (ITcon 1996-; see also Björk & Turk 2006). As e-publishing became more widespread, the word ’electronic’ was dropped from the journal’s title in 2006. The journal has been ambitious from the very beginning and ensuring the high quality of the content has been a matter of course for a team of authors with a background in research. The journal’s editorial practices were also clearly and transparently established at the outset. As for the technical aspects of the publishing platform, every effort has been made to ensure they are fit for purpose. (Björk 2021.)

”The journal was also recently listed in various scientific directories or indexes, and this is important,” Björk adds, before continuing to explain why; ”researchers publish in channels that are referenced. For a researcher, citations are currency.” Today, the journal, which Björk edited from its inception until 2010, is listed in the DOAJ and SCOPUS directories, among others.

Björk’s approach to open access and open science in general has been shaped by the interests of researchers. For her part, Hormia-Poutanen’s motivation to promote open access has been driven by the perspective on the matter brought by research libraries. During the 1990s and early 2000s, libraries faced cuts to their acquisition budgets, which led to a very significant drop in subscriptions to scientific journals. At the same time, e-publishing started to become more common in the field of scientific publishing. In fact, as Finland approached the dawning of the new century, there was already consideration of whether libraries could jointly acquire materials. The result of this debate was FinELib, which was created in 1997. ”It started out as a project, but very soon the benefits of the work were also recognised by the then Ministry of Education, and we were able to consolidate the work,” recalls Hormia-Poutanen. Now, in 2022, FinELib is known as a consortium of Finnish universities, research institutes, and public libraries that promotes access to e-resources and open access publishing.

”For research organizations, and especially their libraries, the business models used in scientific publishing at the time were worrying to say the least. Acquisition costs rose from their previous levels. And while the creation and consolidation of FinELib was an important step, it soon became clear that more work was needed,” says Hormia-Poutanen. ”Researchers were publishing in channels where access was charged at a premium, and year after year the cost of acquisition kept increasing. At the time, we thought that this couldn’t go on forever.” The scientific publishing business model described by Hormia-Poutanen is still prevalent in 2022: researchers and their organizations even have to buy back the results of their work if they want to stay up to date in their fields and do what’s expected of them in their line of work. 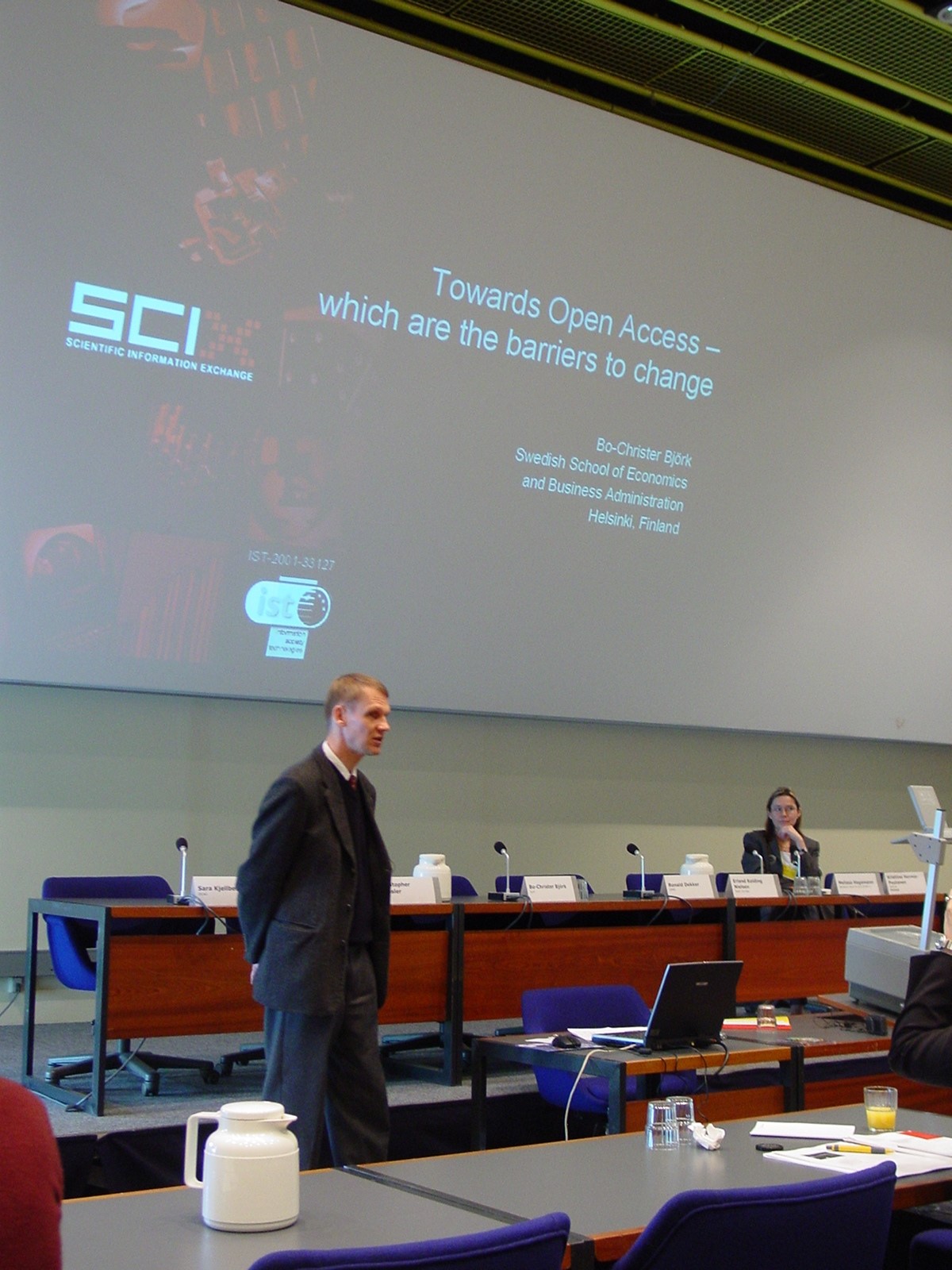 The wider promotion of open access publishing was also seen as important. The first Nordic OA conference was held in Lund back in 2002 (Wayback 2022). It was at that conference that the idea of creating an index of OA journals was born, and the idea became the basis for the now widely known and respected Directory of Open Access Journals (DOAJ). At Hanken, Tomas Gustavsson’s thesis, supervised by Björk, had already compiled a list of 300 OA journals at the time, and this was gifted to the new index when it was launched. Today, DOAJ indexes over 17,000 journals.

It is clear from the above that Finland has been very active in promoting open access since the early 2000s. Looking back over time and at current circumstances, the question inevitably arises as to why we are still facing the same problems as back then. Has all this work been done for nothing?

”I was perhaps a bit optimistic back in the early 2000s. While the big OA campaigns have attracted attention, sometimes the issue has been forgotten,” Björk says. ”But progress has been made,” notes Hormia-Poutanen, ”for example, most Finnish scientific journals now publish their content for immediate access. Until the 2010s, the vast majority of them were subscription-based. Also, the degree of openness and opportunities to publish openly in international publishing channels have increased significantly compared to ten years ago,” she observes.

National and international policies have an impact, but the effects are felt gradually and sometimes over a long period of time. They can also be unforeseen. This has also been the case in the promotion of open access publishing, with large commercial publishers having developed ways to make substantial profits through means including OA. 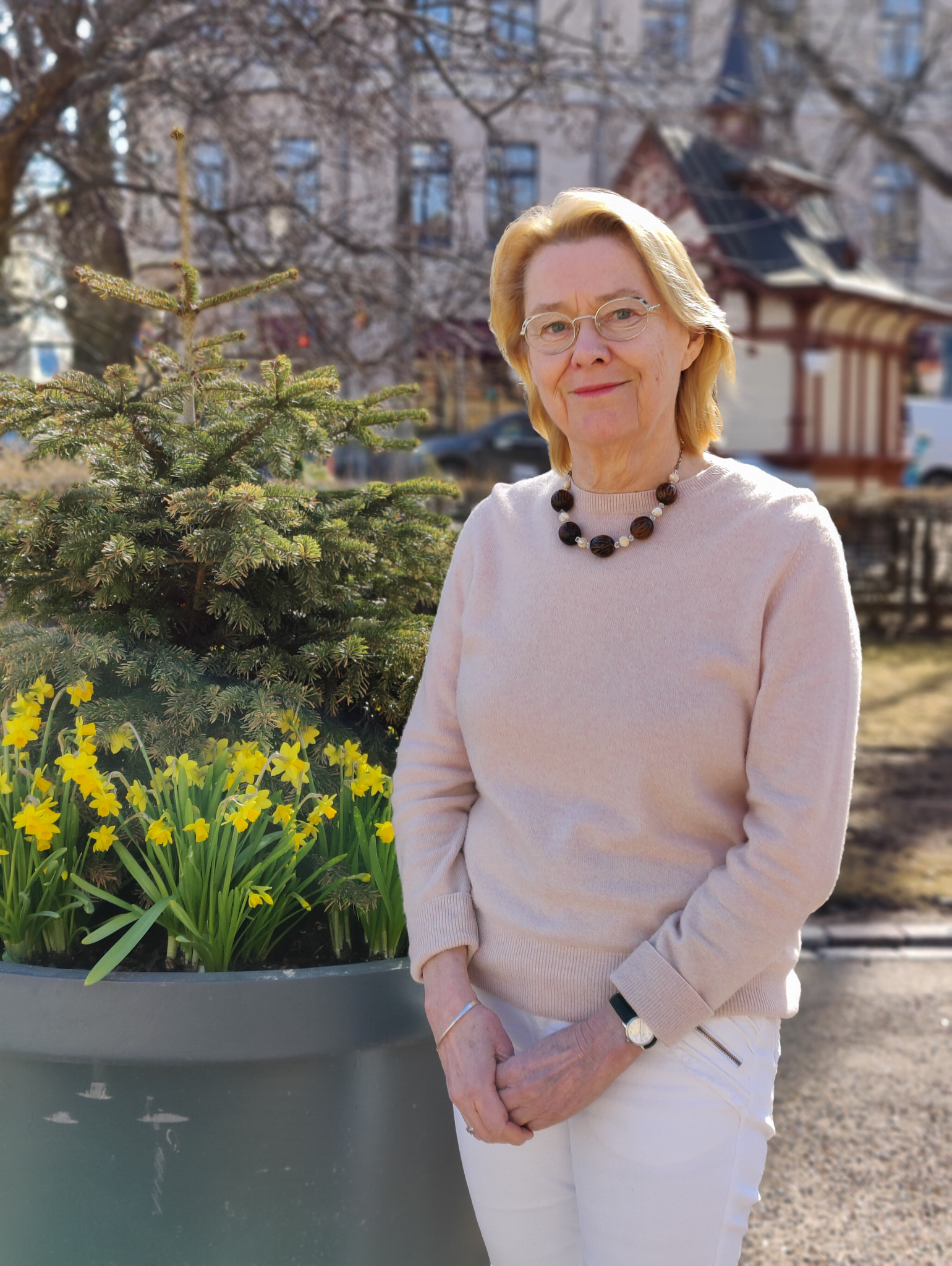 Photo 4. Kristiina Hormia-Poutanen has promoted open access practices in science and academia  for example in her roles as advisor and president of Liber and as Finland’s representative in the EU’s Open Science Policy Platform. Photo: Laura Lipponen 2022.

”It’s true that a small number of huge publishers control the rules of play in the field of scientific publishing more or less to suit their will,” says Björk. ”Small universities and countries that are not able to coordinate the joint acquisition of materials are no match for the big players. But they understand the language of money and, today, as research funders have started to promote open access, we are already in a better position than we were twenty years ago.” Hormia-Poutanen expands on this: ”Transformative agreements are a big step forward, and they have paid off. Now is the time to design new solutions and strengthen the role of fully open publishing channels as channels for scientific publishing.”

Transformative agreements aim to move from a business model based on subscription fees for scientific journals to one based on open access publishing services. The aim is to create a space in which scientific publications are freely available to those who need them. ”How to finance this change in a sensible way is a question that should be resolved now,” says Hormia-Poutanen. 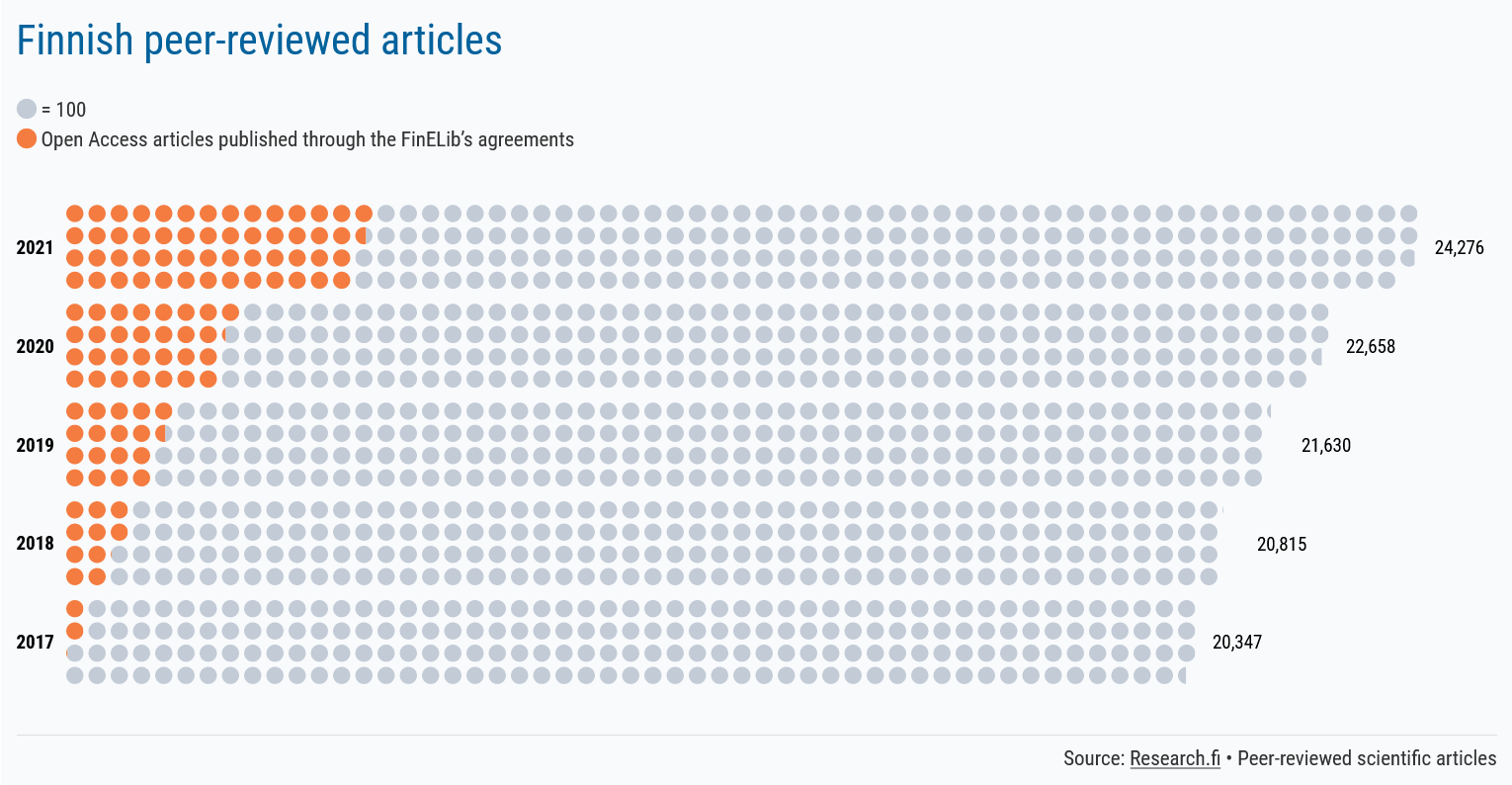 ”It’s unlikely that all publishing channels will ever be fully open,” Björk notes, ”but it is nevertheless important and sensible to continue efforts to make the results of scientific research as open as possible. And just as in various fields of research, it’s important to work across political and geographical boundaries in scientific publishing. Without international cooperation, success is impossible.”