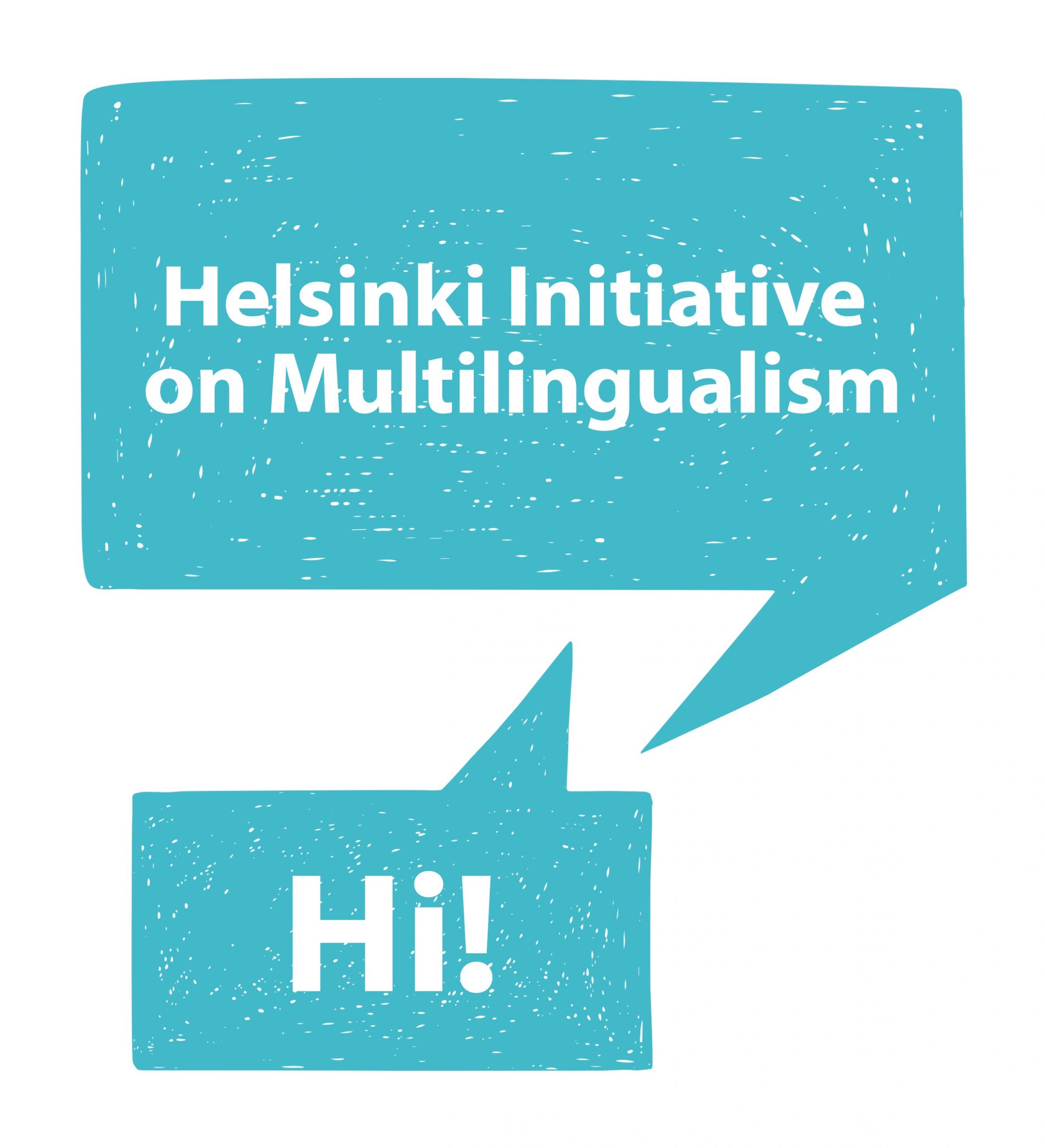 Note to the readers: This article was originally published in Finnish in Tietolinja issue 2/2021. Since the topic is of interest to non-Finnish audiences as well, Tietolinja decided to make the text available also in English.

The purpose of the Helsinki Initiative on Multilingualism in Scholarly Communication, published in 2019, is to 1) encourage the dissemination of research-based knowledge to an audience broader than the scientific community, 2) support national publishing channels that facilitate multilingual publishing and 3) promote multilingualism in research evaluation and funding systems. The purpose of this article is to examine, from the perspective of the Helsinki Initiative, the significance of domestic scholarly publishing in particular to the Finnish scientific community, as well as related challenges with the funding of Open Access publishing.

One of the most important objectives of the Helsinki Initiative is to secure sufficient resources for non-profit scholarly publishers so that they can maintain a high level of science and research integrity in scholarly publishing in national languages and transition to Open Access publishing in a sustainable manner.

The Finnish research community has set immediate open access to peer-reviewed journal and conference articles as of 2022 as its ambitious objective. A policy regarding open access to scholarly books is currently being prepared. The demand for open access poses a new sustainability challenge to Finnish scientific journals: how to continue publishing operations sustainably without subscription fees? Attempts have been made over the years to create a funding model that would facilitate open access in domestic scholarly publishing, first in the Kotilava project and currently by Open Science Coordination.

The international background of the objectives of the Helsinki Initiative

The future of multilingual scholarly communication is not merely a national question, as it is also extensively related to international policies pertaining to responsible research and open science. The Helsinki Initiative was established in 2019 by the Federation of Finnish Learned Societies (TSV), the Committee for Public Information (TJNK), the Finnish Association for Scholarly Publishing and, of its international cooperation partners, Universities Norway (UHR) and the COST action European Network for Research Evaluation in the Social Sciences and the Humanities (ENRESSH).

The Initiative has already been signed by 900 organisations and individuals from 70 countries, including the Rectors’ Council of Finnish Universities (UNIFI). In their joint announcement of their endorsement of the Helsinki Initiative, the European University Association (EUA), Universities Norway and UNIFI emphasise the importance of multilingualism to European universities in particular:

Balanced multilingualism is particularly relevant for Europe, as its research is characterised by geographic, cultural and linguistic diversity and the common principle of excellence. The strength of European universities lies in aiming at international leadership while being locally anchored. This also affects the use of language at higher education institutions” (EUA, 2019).

The UNESCO Recommendation on Open Science, approved in November 2021, brings up multilingualism as part of the definition of open science. According to UNESCO, the key purpose of open science is to ”make multilingual scientific knowledge openly available, accessible and reusable for everyone.” Consistently with the objectives of the Helsinki Initiative, UNESCO encourages its member states to take concrete action to secure the diversity and multilingualism of science communication.

Encouraging bibliodiversity through the diversity of formats and means of publications, including those produced by the humanities and social sciences, and diversity of business models, by supporting not-for-profit, academic and scientific community-driven publishing models as a common good. Encouraging multilingualism in the practice of science, in scientific publications and in academic communications.” (UNESCO, 2021).

Especially in Europe, it is common for researchers in the social sciences and humanities (SSH) to publish their work in both foreign and domestic languages. The proportion of English-language publications in Finnish universities’ publication production is two thirds of all peer-reviewed publications in the SSH, which is very large by European standards. In conclusion, publishing in domestic and foreign languages are not mutually exclusive practices, but instead complement one another as practices in scholarly communication and publishing.

The significance of Finnish scholarly publishers to the Finnish scientific community

The 9,779 peer-reviewed publications published in Finland in 2018–2020 – including journal, conference and book articles, separate works and editorial works – constitute 11.2% of the peer-reviewed publication output of Finnish research organisations (Figure 1). Domestic publishing channels are used in all scientific fields, but particularly in the humanities and the social sciences. Additionally, domestic journals and book publishers are utilised by all types of research organisations, universities, hospital districts, state research institutions and universities of applied sciences. Among the journal and conference articles, which are more typical in natural sciences (including engineering, medical sciences and agriculture), the proportion of domestic publications is 7.9%.

Finnish scholarly journals and book publishers have the unique and important task of providing the Finnish research community with an opportunity to publish new research and have critical discussions about locally and internationally significant research results in the national languages (Finnish and Swedish): 72% of domestic journal and conference articles and 82.7% of book publications have been published in Finnish or Swedish (Figure 2). From the perspective of multilingual scholarly communication, foreign scholarly publishers cannot replace domestic scholarly publishers, as they publish virtually no Finnish-language publications.

Research results are published in the national languages in all scientific fields, but this is particularly important in the humanities and social sciences, as the research often focuses particularly on the special features of Finnish society, Finnish culture and the Finnish language. However, a considerable proportion of the publishing activity of domestic scholarly publishers is aimed at the international scientific community as well: 27.6% of peer-reviewed journal and conference articles and 17.3% of book publications are published in foreign languages (primarily in English). As such, Finnish scholarly publishers serve both the national and the international scientific community.

Open access to publications among domestic and foreign scholarly publishers

In the spring of 2021, 53% of domestic and 57% of foreign peer-reviewed publications published in 2018–2020 were openly accessible on the publishing channel’s website or as self-archived (Figure 3). Book publications have a clearly lower degree of open access than journal and conference articles, but Finnish scholarly publishers are doing better in this respect than foreign publishers. Of domestic publications, the degree of open access in Finnish-language publications in particular is clearly lower than in other publication languages as regards journal and conference articles and book articles, edited works and monographs alike (Figure 4). The proportion of openly available publications appears to be increasing at a slower rate in domestic publications and publications published in the national languages than in foreign publications (Figure 5). As such, the promotion of open access is the greatest challenge in the field of national publishing operations as regards Finnish and Swedish-language publishing, which is particularly important to multilingualism.

Figure 3: Proportion of openly available publications (on the publication channel or as self-archived) in the peer-reviewed output of Finnish research organisations by publication type in 2018–2020. (Source: VIRTA Publication Information Service).

Figure 4: Proportion of openly available publications (on the publication channel or as self-archived) in the peer-reviewed output of Finnish research organisations by publication language in 2018–2020. (Source: VIRTA Publication Information Service).

Figure 5: Change in the proportion of openly available publications (on the publication channel or as self-archived) in 2018–2020. (Source: VIRTA Publication Information Service).

An important goal of Open Access publishing is to remove the subscription fee-based pay walls in conventional science publishing that limit open access to scientific research. The Budapest Open Access Initiative turned 20 in February, yet pay walls have been only partially removed. Open Access publishing has become part of the ’read & publish’ deals of national consortiums and research organisations. Furthermore, the majority of the subscription fee-based journals of today are hybrid OA journals, which means that they facilitate the opening of individual articles in the publisher’s service for an article processing charge. The majority of journals also facilitate the self-archiving of peer-reviewed versions of published manuscripts into an open access archive, either immediately or with a delay.

Two publishing models for immediate Open Access publishing (so-called Gold OA) have been established alongside subscription fee-based publishing, one of which is based completely on APCs while the other publishing model is free for publication authors and readers alike (so-called Diamond OA). The advantage of both of these over the subscription fee-based publishing model is that they make all publications immediately openly accessible. On the other hand, APCs form an obstacle to publishing for researchers from countries, organisations or fields with a lower level of research funding. It can also be observed that the APC model has prompted international commercial scholarly publishers to compete over publication volumes instead of quality.

From the perspective of the Helsinki Initiative on Multilingualism in Scholarly Communication, it is important to also note that the Open Access publishing model based on APCs has proven to be practicable mainly for journals that are published in English and aimed at international authors and readers (Figure 6). For Open Access journals publishing articles in almost all other languages, the Diamond OA model has proven to be virtually the only viable Open Access publishing model. There are not many scientific journals operating on APCs in Finland, and the few in operation are English-language channels aimed specifically at the international scientific community. The majority of Finnish peer-reviewed open access journals are Diamond OA journals. 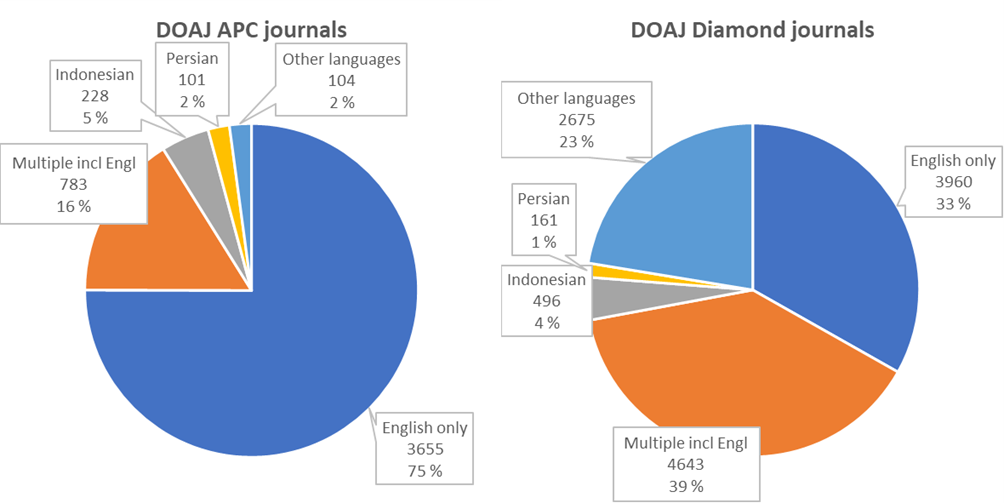 The development and operating conditions of Diamond OA journals and Gold OA journals with APCs are interdependent in the sense that research funders, organisations and libraries have limited resources as regards the costs of Open Access. As it stands, these limited resources are used primarily for covering the increasing APCs of commercial international publishers in hybrid and Gold OA journals. Consequently, little to no resources are left for supporting domestic non-profit Diamond OA publishing as a common good. However, the Finnish scientific and research community is committed to creating a ”jointly funded publishing model that facilitates immediate open access to research articles published in Finland.”

The funding of open access in publishing operations in the national languages is a minor expense compared to the subscription fees and APCs paid to international scholarly publishers. Open access to high-quality research-based information in the domestic languages serves the interest of the entire research community and society at large. For this reason, Finnish stakeholders should – in accordance with UNESCO’s recommendations – give the highest priority in the public funding of Open Access to securing open access and the operating conditions of Finnish and Swedish-language scholarly publishing.